Blast from the past

Trilogy is a name that you may remember from the nineties, when it could be found on a range of valve amplifiers that were often chrome-finished and highly regarded. Trilogy ceased production in 1999 because, according to designer Nie Poulsen, not enough time was spent on selling the product, due to the fact that most of it went into making it sound and look as good as possible. 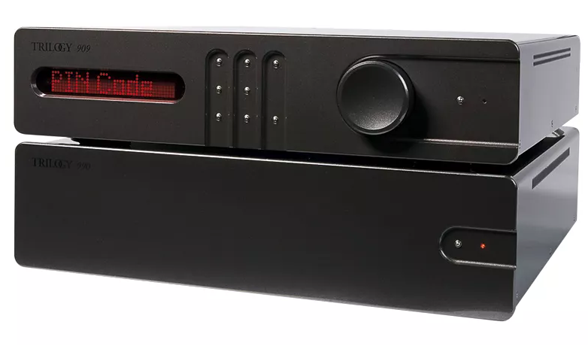 Poulsen didn't abandon hi-fi, however, and went on to start lsoTek the mains conditioner company. He then went on to form lsol-8 and then, in 2007, to revive Trilogy, a move that eventually led to last year's relaunch.

Despite appearances, the latest Trilogy models are still valve amplifiers, but they have some distinct differences to most of the breed. The 990 power amplifier is a hybrid design with a sol id-state output stage of the feedback-free variety and the 909 preamp is the most sophisticated example of its type in the glass-audio world, thanks to onboard microprocessing that makes an iPod look ill-equipped.

A clue as to its flexibility lies in the dot-matrix display. This can be set to show volume level, input and even the time, but before you can do anything with the 909 you need to enter a PIN code. This is for security reasons, but you only need to do it once unless the preamp is unplugged from the mains for more than half an hour. It's unlikely to stop some 'tea leaf' from half-inching it should he feel the need, but is worth remembering if you ever spot one on eBay.