Brinkmann turntables embody the remarkable standard of German engineering better than many of their competitors, the pictures give you some idea of the build quality on offer but in the flesh this brute of a record player is a truly remarkable state of affairs. Everything is superbly finished, even the bits you can’t see – the drive pulley is not on show for instance but hides under an acrylic cover with the belt entering via a slot in the side of the housing, that’s a very nice touch and not one I’ve seen before. It was also supplied with a raft of hex drivers including a 6mm one with a ball on the end that initially puzzled me, then I realized that it was designed to do up the substantial bolts at the bottom of each arm base. Attention to detail is very high. 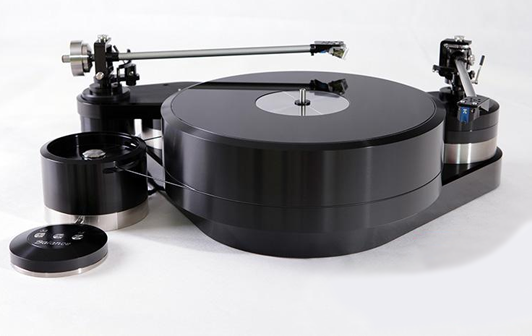 It is of course massive in all respects, it arrived in five boxes only one of which being for the extra tonearm. This meant that there was another wing on the plinth itself that increases the overall width to 50cm and meant that I could only just squeeze it onto the top of my rack. Set up was a slow process, partly because of the extra arm and two power supplies, one for the motor and another for the bearing, but mainly because there are only limited instructions. For all its scale however, this is not a complicated turntable; there’s no suspension to set up and both arms arrived with their cartridges in situ, which took a lot of the pressure off. The 12.1 and 10.0 arms (the name indicating the length in decidedly unGerman imperial units) came ready installed in large stainless steel and aluminium bases. These slot into round holes in the plinth and if you have a Brinkmann (or Clearaudio) alignment gauge set-up is just a matter of rotating the base until the stylus sits correctly on the gauge.

The 12.1, which is the longer of the two arms, has an extended base so that the turntable itself remains a (relatively) sensible size, on some designs this might look a little unbalanced but the substantial build of the Balance and the fact that the arm-base sits behind the platter gives it more than sufficient integrity.

Brinkmann arms don’t come with external leads but in this instance were connected to RCA sockets in the base which also has a small hole for the supplied earth lead. This approach means that there’s an additional junction between cartridge and amplifier which is not a good thing, but on the plus side you can switch cables with ease which is quite appealing.