There’s an interesting piece on the Brinkmann website which tells us a lot about the way Helmut Brinkmann’s mind works. In essence it explains how Helmut noticed that the tiny screws that adjust the cantilever on the EMT cartridge were made of steel and realising that this was probably not a good idea he set about trying screws of different materials and in different arrangements to find the best sounding arrangement. These screws are 1mm in diameter, the man’s attention to detail is clearly in another league to that normally encountered even in German engineering. After considerable experimentation he came to the conclusion that having one of the three screws in titanium produced the highest fidelity. I’m impressed that he made the time to listen, clearly German TV is no better than the programming we get over here! 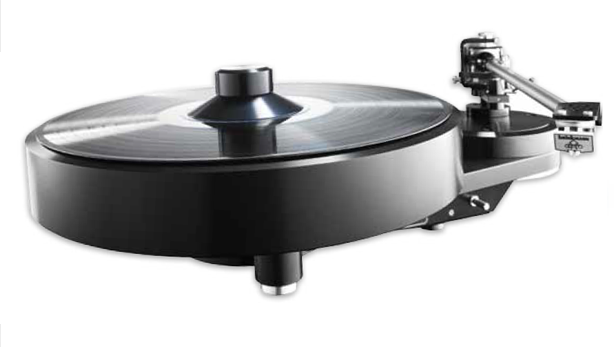 The Bardo is Brinkmann’s second direct or magnetic drive turntable. It was preceded by the Oasis (which looks like the same design on a plinth) and has the same rather elegant drive system. The motor and the bearing are one piece, that is they are combined because they both need to be in the same place. This is obviously not new, Technics and many other Japanese manufacturers did something similar over thirty years ago but I can think of only one other example with audiophile aspirations. That example is the Goldmund Studio which is no longer produced but had a pretty strong reputation even in the context of that company’s exalted range.

While the idea of putting the motor around the bearing would seem to be a logical thing to do in practice it’s not without difficulties. The main one is that electric motors ‘cog’, that is their rotation isn’t totally fluid but consists of a series of small jumps as the rotor is pushed from one coil to the next. Brinkmann has sought to combat this by placing the coils at 22.5 degrees to one another and having overlapping magnetic fields, this was found to reduce cogging and make for higher sound quality compared to a traditional 90 degree layout. The Bardo also has somewhat more substantial platter than direct drives of yore, it weighs 22lbs (10kg) and the inertia that this provides further helps to smooth out any remaining cogging.