Surely the strangest set of headphones in this group, this open back entry level  model from Stax is actually a set of 'electrostatic ear-speakers', as the company calls them, and an energiser box. Effectively then, no headphone amp is needed; these work straight from a line output. As such, the package rep-resents tremendous value for money. 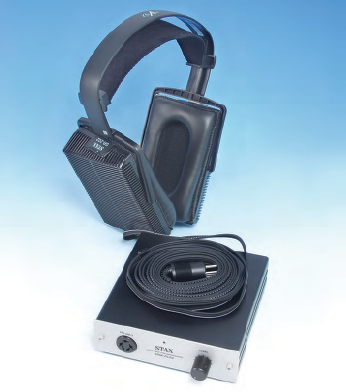 They’re rather odd to use. It feels like you’re wearing two paperbacks on your head, albeit lightish ones that only weigh 300g. But considering their bulk, it is amazing just how comfortable they are. They have a very light touch; unlike the Sennheisers they don’t lock your head in a vice. Still, the PVC cushion pad covers can get a little sweaty after long-term use, which is a pity. Build isn’t bad, but you wouldn’t want to abuse them like you could the Sennheiser HD 650s, and the best you can say about their styling is that it’s quirkily retro...

The superficial character of the SRS 2050s can be summed up thus; they have superlative upper midband and treble but iffy bass. But that would be too easy and not provide the whole story. Playing The Beatles’ ‘Taxman’, for example, and I found little in the way of rich, deep bass, but it was certainly fair to say that upper bass was plentiful and Paul McCartney’s wonderful mid-track work was relayed well. Upper midband and treble are both detailed and eloquent with no harshness evident. Instrumental separation is excellent, broadening the soundstage and adding interest to the track.