Cream Of The Crop

Scantech’s cartridges may not have been the first to dispose of the conventional metal body (that was probably vdH’s EMT modifications) but they were the first that really exposed its sonic impact. 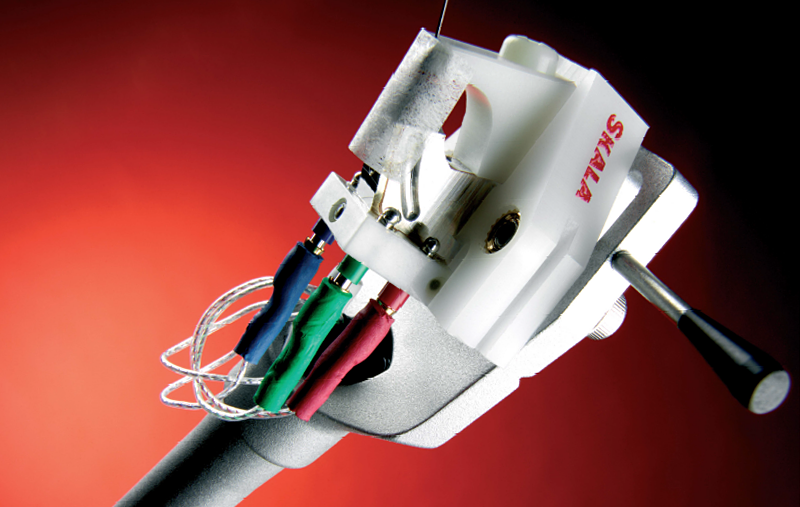 Their original Spectral MCR and Tsurugi designs both allowed easy removal of the protective bodywork and thus simple a/b comparisons. It wasn’t long before audiophiles were stripping their cartridges naked and reveling in the “free” upgrade that resulted. Since then, the company’s own brand Lyra designs have become progressively simpler and more refined, both in structural and electromechanical terms, the latest Titan, Helikon, Dorian series offering greater linearity and the advantages of an open chassis combined with an extraordinarily effective stylus guard. Now, with the arrival of the Skala, we see the first in the next generation of Lyra cartridges and a step change in construction and performance.

Priced at £1849, the Skala represents an interim step between the much loved Helikon (although currently it offers neither mono nor the lower-output SL variants) and the flagship Titan i. At first glance its plastic chassis might seem like a step backwards, but in fact nothing could be further from the truth. But to appreciate just why that is we need to get back to the reasons for going naked in the first place.

A moving-coil phono cartridge is a device designed to measure incredibly small vibrations and convert them into voltage. In doing so it faces a number of conflicting requirements. Any spurious vibration in the cartridge structure will distort the input, making structural rigidity a prime consideration. But at the same time, any non-linearities in the magnetic field used to generate the voltage will also introduce their own distortions, meaning that any excess metallic material close to that field is highly undesirable. So, on the one hand we want to mechanically close couple the moving parts, but on the other we want to locate them in as near to free space as we can achieve.