As modern headphone ampliers go, the sleek Trilogy 931 is one of the simplest and smartest. So does that eschewal of complication translate into superior sound quality? 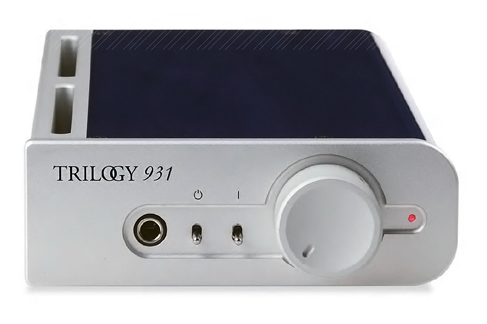 Headphone ampli? ers, once a rare breed, are now on offer hither and thither. To complicate matters, they come in a variety of guises: not just large and small, svelte and ugly, but with or without onboard DACs, with or without balanced headphone outputs, with or without basic preamp functionality, etc. Never have audiophile consumers who enjoy – or are forced into – headphone listening at home had such a bewildering choice of dedicated electronics on which to drop their money.

Trilogy’s 931 is unusually straightforward in what it offers. A spin-off from the costlier 933, it’s identical in its core features. It is purely analogue, so if you need D-to-A conversion it will have to be performed externally. It offers unbalanced inputs only, on two pairs of phono sockets, and a single unbalanced output via a ¼in jack socket.

So balanced signal sources and headphones with balanced wiring are not catered for, which is not unreasonable given the 931’s asking price of £895 for the standard aluminium ? nish. With the eye-catching Mediterraneo Blue cover of the review sample (? nished in a paint used by Maserati) the tariff rises to £1070 but the result is unquestionably classy looking, compromised only by the black Torx-head fasteners at the top front and rear of the wrap-around enclosure.

To the left of this is a milled-from-solid aluminium heatsink that thankfully lacks the sharp edges typical of off-the-shelf ? nned items (and, as Trilogy points out, their mechanical resonances too). This hints at a high standing current in the single-ended Class A output stage [see box-out, p61] and veri? ed by the 931 running quite warm, once it has been powered for a while. I measured the heatsink temperature as about 45°C with the 931 mounted on an open shelf at an ambient air temperature of 22°C, a modest differential of 23°C.