Last year, I was delighted  to become a father for  the first time. While I’ve generally found the whole experience to be brilliant, there’s no escaping the fact I have less time to listen to music. When I do get the chance, I’m often pushed towards using headphones to keep the noise down. I don’t begrudge this – I have access to some excellent headphones and I know that this isn’t forever. 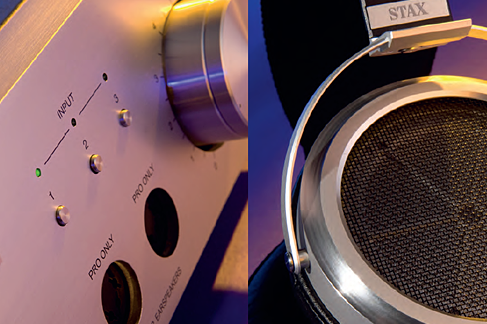 What if it was forever though? I’d never really considered the possibility of a life beyond speakers up until this point, but spending time ‘buttoned up’ got me thinking. Is it possible to have a headphone setup that doesn’t merely provide an alternative to speakers when you can’t make any noise, but actually provides a superior listening experience? Up until very recently, I would have doubted that such a thing was possible, but after some time spent with this little ensemble I’m not so sure.

What we have here isn’t merely a pair of headphones and a headphone amplifier, it is instead probably the ultimate expression of headphones. It uses technology that is complex and difficult to perfect and that requires a unique product to make it function at all. This is not a convenience item for use only when you can’t make too much noise, it’s something different.

Stax has been making distinctive audio products since 1938, and 2014 marks the 60th anniversary of its first electrostatic product – a tweeter that saw the light of light of day in 1954. Six years later, the company launched its first headphones – and from the outset termed them ‘Earspeakers’ – that made use of the same principle.

Insane in the membrane

Some 56 years of evolution brings us to the SR-009 you see here. The flagship of the current range is the culmination of everything Stax knows about headphones placed in a single utterly compromise-free package. The electrostatic membranes – that create sound via an electrical current being passed across them – are a new ultra-thin polymer type. These are  in turn motivated by new ‘MLER’ Electrodes that provide a more even drive. These drivers are placed in enclosures that are round for the first time in years instead of the classic rectangle that we associate with Stax.

As with any Stax Earspeaker setup, the SR-009 is only half of the story. The electrostatic drivers need current to run that is far beyond the ability of a conventional headphone amp to deliver, which means that the SR-009 is partnered with the SRM-007tII. Stax describes this as an ‘Energiser’ – a three input headphone amp that also generates the required power to run the electrostatic drivers. This particular energiser has been through an upgrade process carried out by UK distributor Symmetry Systems. This ensures that the quartet of valves are cryogenically treated and partnered with a replacement high-quality mains fuse. These detail changes unlock a considerable performance boost from what is already an extremely capable device.