We have already touched upon the Stax  SR-009. Our Publisher, Chris Martens, has a great deal of respect for the product, both when it is driven by Stax ‘energisers’ (Stax-speak for electrostatic headphone amplifiers) and especially third-party electrostatic amps. But, the audiophile is an odd breed, and Chris’ passion for high-end headphones and earphones can sometimes be met with a simple dismissal by those still wedded to their loudspeakers. But in real terms where does the Stax SR-009 (accompanied this time by the SRM-007tII energiser) stand in relation to the wider audiophile world? 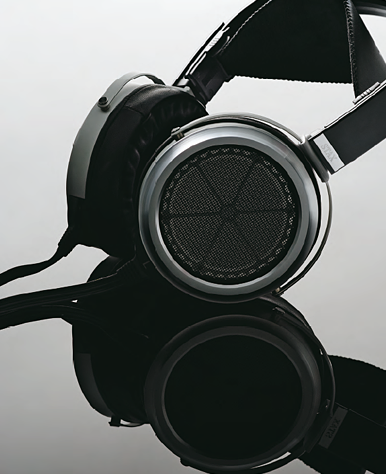 There’s not much I can say about the SR-009 that people don’t already know. It’s the flagship electrostatic ‘ear speaker’ from a company best known and associated with electrostatic headphones, which need a purpose-built electrostatic amplifier or ‘energiser’ (not simply a conventional headphone amplifier). Also, the whole system costs as much as a good second-hand car.

However, where a flagship design typically adds to the standard range, there is next to nothing on the SR-009 shared with the rest of the range. Even down to the diaphragm material. The SR-009 uses an ultra-thin film in place of the usual reinforced engineering plastics, because it has all the properties needed by an electrostatic diaphragm, but with more resilience. It doesn’t come cheap. Neither do the photo-etched multi-layer electrodes (or ‘MLER’: not the best acronym, unless you speak fluent zombie) that drive the whole diaphragm itself. The enclosure itself is a traditional circular shape, as opposed to wearing two rectangular boxes on your ears as in the 207-507 models, and this is more ear-shaped like the 007s and other headphones. The aluminium outer ring connects to the headband with a tried-and-trusted gimballed connection, which means it’s a universally comfortable design (you’d have to have a really weird head not to find these comfy). While the former 007 flagship comes in a spiffy flight case, the 009 oozes class in its wooden box.

It connects, via a flat cable and a moulded five-pin plug to one of a range of energisers; high voltage amplifiers designed specifically for the task of driving those stator ear panels. As mentioned previously, we used the top Stax flagship, the SRM-007tII. This uses two pairs of 6FQ7 tubes in the output stage, and a FET input stage, running pure balanced and in full Class A. Symmetry ‘hot rods’ the SRM-007tII slightly in its ‘Kimik’ guise, with a spot of cryo treatment for the tubes, gold plated pins and EAT tube dampers, adding an extra £200 to the base price. These 6FQ7s are not there for show, or to soften or warm up the sound. They are there because high-voltage electronics was more of a ‘thing’ in the age of tubes, and although solid-state can also be used in high-voltage capacities, this is one place where hollow-state technology has indisputable benefits, that do not just fall to ‘sounding nice’.

The SRM-007tII can take balanced or single-ended audio inputs, but it is distinctly balanced in design, and this perfectly fits the performance parameters of the inherently balanced SR-009. Dedicated headphone enthusiasts could use this in place of an amplifier entirely, while more traditional audiophiles would simply connect it to a line or tape output. It’s an unfussy performer, not requiring careful handling, is not inherently cable fussy or platform sensitive, and despite having four glowing bottles inside, isn’t particularly microphonic. That being said, the SR-009s can show up the difference between good, better, and best quality sources with ease and if you are wanting to show off how good your new cables sound, you’ll hear everything through the SR-009s.