While it’s not good to start a piece of writing in the middle and sum up a whole review in a single word in the opening  paragraph, the Stax SR-L700 Lambda earspeakers coupled with the SRM-006tS Kimik 2 energiser are neatly encapsulated in the word ‘graceful’. Everything about them, from the boxes they come in to the sound they make is graceful. That word has lost some of its glow in our hard-edged times, but the Stax challenges that. With good grace. 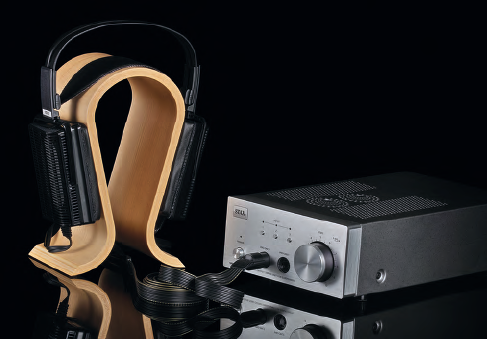 Perhaps the ultimate expression of the almost 40 year old SR-Lambda design, the rectangular SR-L700 contains a highly revised diaphragm, which in fact carries a number of ideas and parts over from the SR-009, to the point where the diaphragm could be considered a ‘SR-009 junior’, making it the best Lambda diaphragm ever made. According to Stax, this diaphragm features “a specially selected thin-film diaphragm as well as fixed electrodes, machined through three-layer stainless etching using heat diffusion.”

The fit has changed too. Its arc assembly is equipped with a 10-click slider mechanism for head-pad height adjustment. Once adjusted, the slider always maintains its optimal position, making readjustment unnecessary.

he other major difference from previous Lambda models is a new cup design. It may look identical, but the structure is much lighter, and its bars are much thinner, in an effort to create ‘less cup’! Stax also reversed that cup, so now the wider part is at the back and not the front. The diaphragms are mounted at a slight angle towards to ear. In the past the wider part of the cup was always in front of the ear.

This feels a little odd to those used to Lambda designs, as if you have got the earspeakers on back-to-front. However, that feeling goes away in a few seconds and is perfectly comfortable in use. British users will find themselves saying ‘bollocks!’ a lot as they instinctually put them on the wrong way round for the first few times – other swearwords are also available.

Other elements comparatively new to Stax have been seen before in other Lambda models, such as the change in structure to the sheepskin leather ear pads (to make them more comfortable for longer listening sessions), and the 6N high-purity annealed copper wires for the core and six silver plated wires for the external cable. All of this helps to build on a design first minted in 1979 and that shows no signs of running out of steam.