Japanese manufacturer Stax have been making headphones (or earspeakers, as they refer to them) since 1950 and have developed a great name for themselves, becoming synonymous with electrostatic transducers in the same way that Nakamichi did with cassette, for example. The SRS 2170 system is the latest incarnation of the breed. Priced at £745 they are the new entry level model, replacing the SRS 2050. 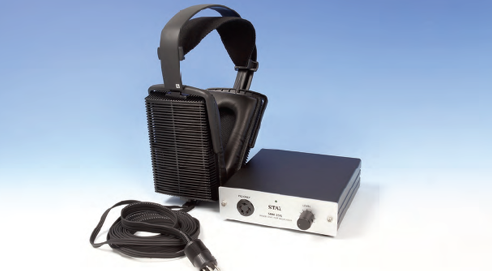 The supplied SRS-252S energiser has a completely revised circuit topology incorporating an all-stage balanced circuit DC amplifier, housed in an extruded aluminium case measuring 132x38x132mm and weighing 540g. The claimed frequency response is from DC to 35kHz and the amplification provides 58dB of gain (x800). All of this is powered by a plug mounted transformer providing  12V DC, 4W.

Although visually similar to their predecessors, the SR-207 electro-static earspeakers come with a new diaphragm, new stators and a high rigidity resin case. The diaphragm is the same as used in the more expensive models in the Stax range, as is the 2.5m long cable, which is a 6 strand parallel structure type with a low capacitance, made using LC-OFC. This is thoughtfully marked for ease of orientation of the earspeakers with a solid line on the left channel and a dotted one for the right (white against the black background).

The resin case is also black, as are the synthetic leather ear pads. Total weight including cable is 490g. Claimed frequency range of these is 7Hz to 41kHz, and are capable of a sound pressure level of 101dB at 100mV R.M.S.