Stax holds a special place in the music lover’s heart. It’s the high-performance electrostatic headphone that even those who don’t like headphones enjoy. But, goes the logic, only a select few can get to enjoy them, because they are very expensive. The rest of us have to make do with high performance dynamic designs because we don’t have thousands to blow on headphones. 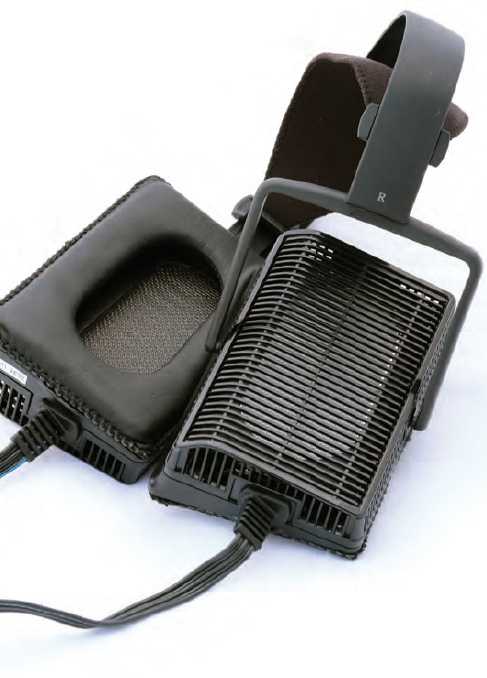 This argument, however, suffers from being complete nonsense, as evidenced by the SRS-3100 system. You see, the SRS-3100 is the Stax entry point, made up of the SR-L300 Earspeakers, and the SRM-252S energiser, at an extremely competitive package price.

The SR-L300 Earspeakers are based on the popular Lambda design, the classic rectangular over-ear speaker-shaped models similar to ones Stax designed back in the 1970s. In order to keep them price competitive, the heavier grade ABS design of the more up-market models from the same Lambda line is slimmed down considerably.

This makes the SR-L300 lighter on the ear than previous designs (by a few grams), but it also makes the overall headphone/earspeaker feel fl imsier than bigger models in the Stax range. That being said, the new slide-type adjustment for the headband is a boon, and should be seen on later iterations of the more upmarket designs in my opinion.

The SRM-252S also shows its inexpensiveness, thanks to a wall-wart power supply and a very small form factor indeed. Where most Stax energisers look like someone cut an integrated amplifi er in half, the SRM-252S is small enough to be hidden by a decent sized paperback book. Nevertheless, for all its ‘CD box set’ size, it hides a small, solid-state Class A amplifi er. This isn’t the kind of amplifi er that could greatly benefi t from the ‘Kimik’ mods found in more upscale Stax energisers (and in fairness, the SR-L300 isn’t the kind of earspeaker that would be improved by a signifi cant upgrade in energiser).

The two are designed to act as amp and headphone as a complete package, and there is no provision for a DAC. Just the one input, in fact. Power and volume are combined in the single volume pot, and a little green LED tells you when the power is being fed to the headphones. There isn’t much in the way of run-in required here. They just work out of the box without fuss. I used them hanging off the end of the Hegel Mohican CD player and the Weiss DAC501 tested elsewhere in this issue.