As reported in Issues 50 and 51, it’s becoming increasingly difficult to ignore the claims for inherent superiority made for 12” tonearms over their shorter (or should that be “stunted”) nine-inch relatives. It’s not just the sonic evidence either. Whilst this trail arguably started with the revelatory uplift in performance offered by the SME 20/12, and was significantly reinforced by subsequent experience with the VPI JMW 12.7, Kuzma 313 and Schroeder tonearms, there seems to be no abatement in the flood of new arms reaching the market. Time then to examine these newcomers and discern whether the 12” effective length is of special significance or just a happy accident. 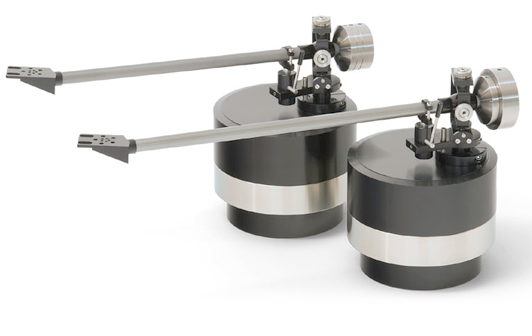 There’s no denying the significant reduction in tracing distortion that comes with increased effective length. The questions that go with that observation are whether that increase can be achieved without compromising other areas of tonearm performance (effective mass, structural integrity and resonant behaviour) and perhaps more pertinently, if it’s so significant, wouldn’t we be better off using a linear tracking design? With these issues in mind, I’ve assembled a second group of tonearms to assess just how consistent the musical qualities detected in the previous reviews prove to be. Is this a function of arm-length and reduced tracing distortion, or something else entirely?

The Breur tonearm is justifiably legendary, both for its establishment of the high-rigidity, medium-mass, gimbal-bearing model that has dominated the tonearm market ever since – and for its cost and limited production that helped contribute to its scarcity. It was these latter factors that encouraged German turntable manufacturer Brinkmann to create their own version of the basic design, the heavily Breur “inspire” Brinkmann 10.5 tonearm.

Of course, combine the elegance and basic layout of a classic design with Brinkmann’s superb standards of engineering and you end up with something quite special; something that has been even further refined into the longer, 12.1 tonearm reviewed here. Aesthetically the Brinkmann arm is dominated by the contrast between its immensely long arm-tube and the compact delicacy and obvious precision of its bearing assembly and lift-lower arrangements. Starting at the front, the parallel-sided aluminium arm-tube is of thinner diameter than the majority of the competition, while the elongated and tapered headshell, beautifully braced and perforated to save mass, which has replaced the rather blocky affair used on the 10.5 adds to the sense of elegance.