Trilogy Audio makes great amplifiers in the UK, and puts them in world-class casework. Until recently, this meant the products made by Nic Poulson and Simon Dart were relatively expensive, but this latest combination of a half-width 908 line preamplifier and similarly sized 992 mono power amps brings the entry price down to a more sensible level – still serious, but rather more approachable. 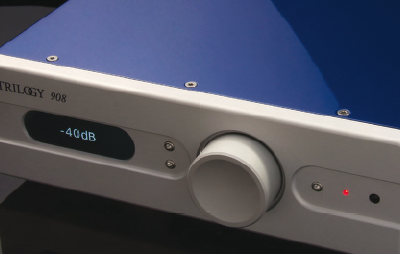 Trilogy could have taken the traditional approach and used bent steel boxes with a slab of aluminium on the front, saving a fair amount of cost in the process. But that’s not the way that the company operates; attention to detail is clearly paramount in design and execution. There’s a nod to affordability with a folded cover, but the 908 and 992s have softly radiused corners and are fashioned from solid aluminium. These pieces may not be massive, but they are built to a standard that few surpass, and the machining on the power amp especially is very classy indeed

The casework does little to give away the technology used inside these components, but in fact both have valves onboard to provide amplification. That being said, the 908 preamplifier uses only one valve to produce gain, the rest of the hybrid design is resolutely solid state. There are very few examples of completely hidden glass power in our world, but it has always been the Trilogy approach; the company takes its international safety certification extremely seriously.

That’s not all that distinguishes Trilogy’s creations; the other common factor is extensive control software, and the sheer variety of set-up options border on the confusing. Thankfully, the menus and sub-menus are all pretty straight forward once you get to grips with the multi-functional nature of the buttons and knob (encoder) on the front of the 908. You expect this sort of functionality out of brands like Linn, Meridian, and Cambridge Audio, but that a company as comparatively small as Trilogy can provide such flexibility on its entry-level preamplifier is remarkable.

Trilogy lets you alter the 908’s ‘home page’ – the information displayed in normal use – which can be set to ‘input’, ‘volume’, ‘time’, or the Trilogy logo. You can set different home pages for operation and standby, too. Other options include input naming, the ability to set inputs in unity gain (film mode for mixed stereo/surround systems), timer on and off, and both maximum and start volume settings. One thing that I haven’t encountered outside of the Trilogy range is PIN coding; a security system that ‘bricks’ the 908 in the event of theft. This is an idea taken from the computer world of course, but as your average ‘tea leaf’ won’t spot this until he’s swiped your system, it’s not the sort of thing that would have me turning off the intruder alarm.