Trilogy is a small but ambitious British company that goes to massive lengths to build professional and fully featured electronics. And I mean fully featured, you wouldn’t guess by looking at the 909 preamp that it’s a hybrid design nor does it give any clues as to the flexibility of the control system, although the nature of the display suggests that it’s a little different. The manual extends to 52 pages and is not overly wordy but it does take you down through the many layers of the menu system in pretty comprehensive stages. As it was delivered the 909 displayed the day and the time by default, but as I can usually remember the former and have a good enough idea of the latter I looked into the alternatives. When the preamp is on it can show the input selected, the volume level or the Trilogy logo, or it can remain blank. It can do this permanently or time out after 30, 60 or 90 seconds and the brightness level can be automatic or at one of nine levels. Each of the six inputs can be trimmed to suit the source or set to film mode for unity gain, effectively bypassing the volume control. Are you getting the picture now?The existence of a timed display hints at the fact that it can be programmed to turn on and off at a time that suits your listening habits, which given that it takes an hour or so to warm up is the facility that I got most use from. Nic Poulson who designs and makes Trilogy equipment recommends you leave it on 24/7 but that seems excessive for two or three hours of listening, not to mention the price of energy these days. 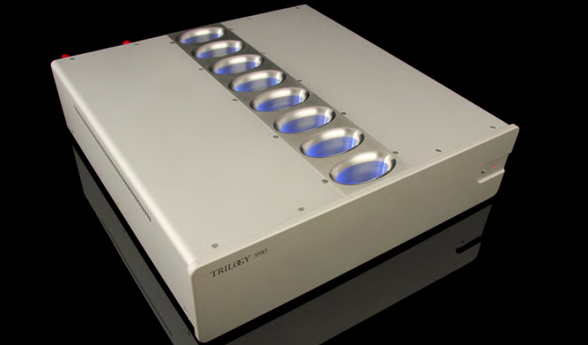 Given the sophistication of control and very high build quality it’s surprising that the 909 is not a balanced preamplifier but has six single ended inputs and two pairs of outputs. Apparently a preamp with this feature is in the pipeline albeit higher up the wage scale. As much attention to detail goes into the circuitry inside as it does to the casework and interface. The volume control is a relay switched, shunt attenuator with precision discrete resistor arrays, you won’t find many more sophisticated approaches to this job. In the latest version of the 909, this model name has been around for a while, is a zero feedback gain stage using 6H6? triodes instead of the ECC88s of original 909. These sit in a new circuit that has greater linearity and lower output impedance so that the preamp can drive long cables. This is just a snapshot of the effort that Trilogy puts into the 909 and all of its products as far as I can tell, for the full story just check out their website, it’s refreshingly short on BS.

The 990 power amp is less complex but equally well made and features scrupulous attention to detail. It has been updated with the same tubes as the preamp which provide all the voltage gain, the output stage is a unity gain MOSFET/bi-polar hybrid which delivers the current. The amp avoids overall feedback and is balanced throughout, those XLR inputs are not just there for convenience. The tube stage’s power supplies are shunt regulated and it has separate transformers for HT and filament supplies, a belt and braces approach. The output stage has a choke input power supply, an approach seen in the better tube amplifiers because it provides the stiffest supply for the output devices. The 990’s styling is blinged up with blue light, this emanates from narrow slots in each cooling tower, the tubes in the billet aluminium central spine of the amp.