A pure solid-state amp from a brand best known for its hybrid designs, this offering proves a big success. 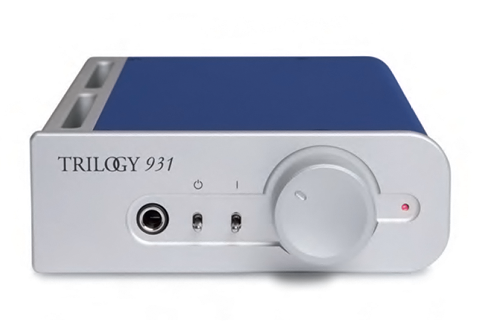 Best known for its capable hybrid amp and preamp models that mix valve and solid-state circuitry, Trilogy Audio is not so wedded to the idea of amps that it won’t go solid state when the need arises. The 931 is evidence of this and is the more affordable of two headphone amplifiers in its range without a valve in sight.

This is a single-ended design that runs in Class A and the circuit itself contains a single output device per channel with no output capacitors or similar in the circuit. Power is provided by a low-flux toroidal transformer and while Trilogy doesn’t supply any figures for the output, it claims it is sufficient to drive any commonly encountered headphone. There is a pair of RCA phono inputs switched via a front panel control, but there’s no looped output. Usefully though, Trilogy has provided an on/ off control on the front panel for those of us not keen on leaving components running all the time.

Aesthetically, the 931 is simple but undeniably attractive, although the smart blue top plate of the review sample is a cost option (see box out). The distinctive single curved edge of the chassis works well in the flesh and the unit is assembled to a very high standard. The volume control is an ALPS pot and has a lovely resistance to it. Like the Pro-Ject (p33), the Trilogy gets pretty warm during operation, but unlike the Head Box RS the heat build up is dissipated by the heat sink on the left-hand side of the chassis and so it never becomes more than warm to the touch.