Encouraging rumours have been circulating for quite a while about this unusual headphone ampli?er from Trilogy, a well established audio company based in South East London. Long known for possessing certain skills in thermionic valve audio design, the company is also well able to create in solid state, not least this 933 model headphone ampli?er which has been quietly building something of a reputation over the past year or two. Incidentally, Trilogy designer and founder Nic Poulsen was also responsible for the successful Isol-8 line of mains power cables conditioners and ?lters, which are run from a separate organisation. 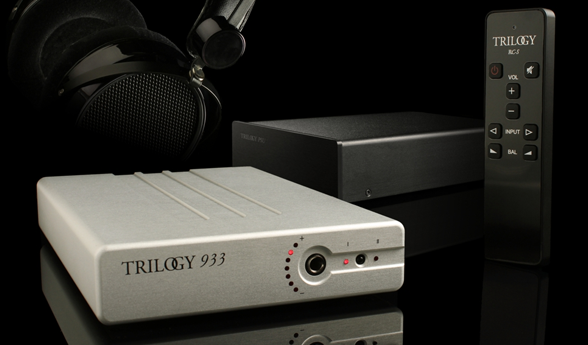 Given that good headphone ampli?ers may be available for £500 and luxury examples may cost £1,000, this £2,000 Trilogy 933 has a rather high pricetag, even though it does come complete with a very convenient infra-red remote control. (Do note, however, that this must not be mislaid, as there are no front panel controls whatsoever.)

The surge in popularity of headphone listening might be di?cult for traditionalists to understand, but it does mean that dozens of headphone ampli?ers are now available at all conceivable prices, from the Creek OBH 21SE at around £300 up to the almost £5,000 McIntosh example. Our last issue reviewed models from Oppo, Lehmann, Beyer and Pro-Ject, while this issue includes coverage of the Sennheiser HDA 600 as well as this Trilogy 933.

While most sales of decent quality headphones are made at prices between £100 and £200, an altogether more aspirational group is found with pricetags that extend up to £2,000. These can make it possible to hear greater levels of musical subtlety, and also distinguish between di?erent driving ampli?ers, leading to improved satisfaction and enjoyment.

As the designer points out (see Boxout), the 933’s ampli?cation section does indeed run warm, no question, and at about 35ºC on my estimate, so I would therefore keep its hefty milled-from-solid-alloy casework unobstructed and away from direct sunlight, for fear of overheating. This is actually a two-box unit: the actual ampli?cation section weighs 1.3kg, while the stainless steel clad power supply unit, ideally placed on a di?erent shelf, turns the scales to 2.85kg.