We loved the Trilogy Audio Systems 933 headphone amplifier when we tested it back in issue 94. It is the company’s first ‘serious’ headphone device; a two-box amplifier that can drive anything with ear cups aside from electrostatics. But, it comes at a price – both financial and technologically; although it’s designed to be used at arm’s length, it has to be used with a remote control to adjust volume. Nevertheless, the 933 remains one of the best. 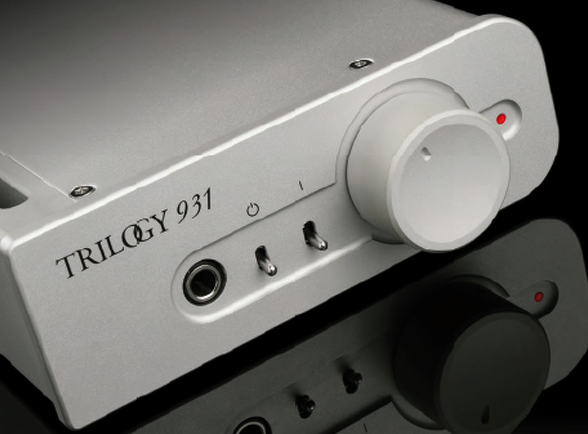 I think, however, many would trade a little of the 933’s uncompromising performance, for a lower price. OK, so you lose the balance control, but I think many would be happy with a headphone amplifier in a single box, with a toggle switch to change inputs, and a more conventional volume knob. So long as the cheaper product gives no quarter to either sound quality or ability to drive any headphone that comes its way, where is the problem? And that brings us to the Trilogy 931.

The Trilogy Audio Systems 931 gives surprisingly little ground to its bigger brother, despite costing half as much as the 933. As suggested, the 931 moves from an external separate power supply to a built-in and oversized linear power supply with a toroidal transformer; however, given that Nic Poulson, Trilogy Audio Systems’ designer, also runs audio power experts ISOL-8 when he’s not making amplifiers, he ‘knows a thing or two’ about power supplies, and the move from external to internal PSU is no great sacrifice. OK, so it doesn’t have the choke input power supply of its bigger brother (virtually unique among solid-state designs) and this does make a difference in terms of dynamic range, but the dynamic range of the 931 is already close to the limits of what many headphones can achieve, anyway.

This is not the only scaled down without compromise product in the Trilogy line-up. The company’s 906 phono stage draws heavily from Trilogy’s top 907 standalone unit. Even the basic casework for both smaller and larger models is similar. And, unlike many brands where the entry-level products are built half a world away, the 931 is built in Trilogy’s London HQ. Despite having a rich audio heritage (including a pre-war Quad, Leak, Beard, Gale, and Garrard) to the best of my knowledge only Trilogy, Roksan, and Vertere still build in ‘The Smoke’ today.

For the 931, the case moves from a machined aluminium clamshell case to a machined aluminium ‘spine’ of front panel and side heatsink, and a lighter aluminium sleeve. This has the advantage of allowing the sleeve to be finished in one of three standard colours (silver, blue, or black) or even its myriad Chameleon Colour System. As with the 933, this is a two line input device, and the circuit is a pure single-ended Class A design, with each channel having its own continually biased output device. As a Class A design, the 931 runs warm to the touch, but not ‘baking hot’: it certainly runs cooler than its bigger brother in use. It has just the one full-sized headphone jack socket, next to a pair of toggle switches (one to power up the device, one to switch inputs); the rest of the front panel is taken up by the volume knob, and a LED power light.