The SPD H1 is the ?rst model in London based Trilogy Audio Systems’ new skunkworks Special Products Division—hence the ‘SPD’ pre?x. These are models that ?t outside of the company’s usual ampli?er range. As the SPD H1 is designed speci?cally as an upgrade on the electrostatic energiser/ampli?ers used to drive Stax Earspeakers, it ?ts that skunkworks notion well (if London had skunks, of course—maybe a ‘hedgehogworks’ instead). 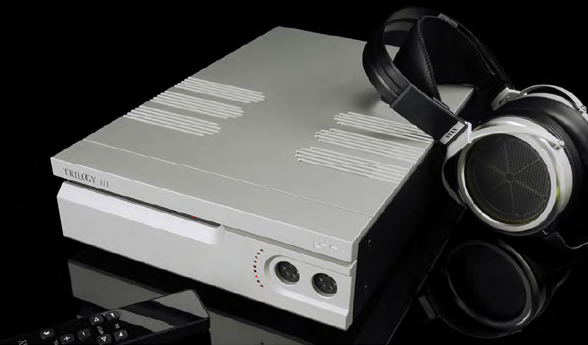 Trilogy designer Nic Poulson started out by basing his ?rst prototype on a Stax 006/007 energiser circuit (solid-state input, tube output stage) as a core and built it to Trilogy’s standards. A month of prototyping later, and Nic realised that while this makes a better 007, that’s just gift-wrapping. Instead, Poulson went back to basics and made the SPD H1 from scratch, to better ?t the requirements of an electrostatic design.

The SPD H1 features a pair of 6C3 triode input tubes and a 6H6 high conductance output triode per channel. It uses two toroidal transformers; one for the tube heaters, the other to power everything else. Tube life is projected at around 5000 hours, and the tubes themselves have been chosen for their linearity, their longevity, and their lack of self-noise. However, these tubes are not user replaceable, because the bias circuit requires ?ne-tuning. I don’t agree with that idea, but Poulson is adamant replacement and biasing is beyond the ken of the home user. Of course, this also means no tube rolling but given the variability of tube rolling ‘improvements’, this may not be a bad thing.

The audio circuits are pure Class A, wide-bandwidth designs, designed from the outset to be a fully balanced symmetrical circuit with zero feedback. All wiring is point to point, using silver-plated copper wire with Te?on insulation. The output sockets for the Stax Earspeakers are made of Te?on, too, while its connectors are gold plated.

The amp features four inputs (two XLR balanced and two RCA single-ended) and there is a remote to control volume, balance, input, and mute. The Trilogy SPD H1 is also available in a similarly priced Direct Mode Version. This DMV version bypasses the remote for volume, balance, mute, and issues driving licenses. This last might not be entirely true. DMV allows the customer to connect directly to their amp or source, and all volume and adjustments are then made at that point.

Trilogy’s UK distributor—Symmetry—is also the distributor for Stax and loaned me a pair of ?agship Stax SR-009 headphones for the duration, as these are likely candidates for use with the SPD H1. However, Symmetry also loaned a pair of SR-L700 earspeakers, the current top of the company’s long-standing Lambda range. Both made for fascinating listening.

There is an immediacy and substance to the sound that struggles to make it out of the standard issue Stax energisers. That’s not something you notice in the Stax designs, but the moment you play the Trilogy, it’s hard to go back. Everything just sounds that bit more earthy, gutsy, and real here. It’s not just about detail, or dynamic range—it’s about realism: visceral, solid realism.