Trilogy is one of the hidden gems in the British hi-fi business. Founder Nic Poulsen has been working far too many hours for far too long producing superbly built and finished products to deserve the relatively low profile that the company appears to have. His Isol-8 products are possibly better known than the Trilogy electronics that have been around for so much longer. 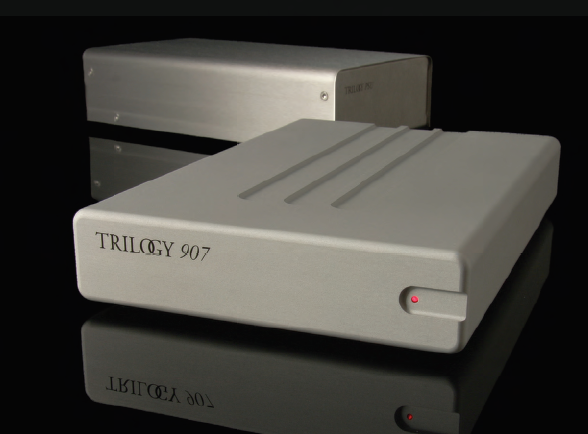 Nic started off making pure valve amplifiers that were distinctively finished in chrome, his hybrid amps today are even more unusual looking as a result of the lustrous Chameleon paint finishes that the company offers. It’s possibly because he goes in for such strong aesthetics and puts them in his advertising that Trilogy has not had the success it deserves. The hi-fi enthusiast in the UK and US is a pretty conservative beast and likes his hardware to look as traditional as possible if the big brands are anything to go by.

As the subject of this review reveals, the default finish on Trilogy electronics is bead blasted natural aluminium, a pretty safe look one would imagine and possibly the angle that will raise the company’s profile. I don’t know if there will be space to include a picture of the 907 phono stage’s chassis before its filled with electronics, because that alone is enough to inspire confidence in the product. The chassis is milled from solid aluminium billet in much the same style as megabucks products from some of the most fashionable names in the business, yet this is a sub £2k phono stage. It’s a beautiful piece of engineering that seems almost excessive given its price point, but solidity confers enough advantages to make its addition to the final cost worthwhile. Fundamentally an incredibly stiff chassis like this will keep resonance to a minimum and acts as a very effective heat sink for what is after all a small amplifier. When you are dealing with the pitifully weak signal that comes out of a moving coil cartridge even small amounts of vibration in the amplifier and EQ stage will have a detrimental effect on the end result. The casework is also machined to provide screening of the incoming DC supply prior to LC filtering (inductor and capacitor).

The power supply design owes a debt to valve technology because it uses shunt regulation rather than the series regulators usually found in solid state supplies. Nic prefers shunt regulators because of their ability to not only source current but to absorb it as well, and when they are heavily biased into class A they have plenty of voltage headroom to deliver this current to the gain stages. The relatively noisy part of the power supply is housed in a separate and rather less elaborate stainless steel case in order to keep magnetic fields at bay. Here you can find a custom toroidal mains transformer in a copper faraday screen that feeds a choke input supply for minimal electrical noise. The DC supply cable is fixed at the phono stage end and connects to the PSU with a locking DIN plug. You know the stage is on because a pair of blue lights glows underneath the front in a style reminiscent of custom cars, they are not merely for style however and actually bias the class regulators).