Trilogy Audio Systems is a small British amplifier manufacturer, best known for making hybrid amplifiers that rely on valves for their performance and not their looks. This is because seemingly unlike many manufacturers, Trilogy’s Nic Poulson actually read the EU regulations on electrical safety and isn’t too keen on breaking those rules by leaving exposed something that can at once cut, burn, and electrocute. This is what separates the simply ‘small’ from the ‘small, but highly professional’, and the 925 drips professionalism. 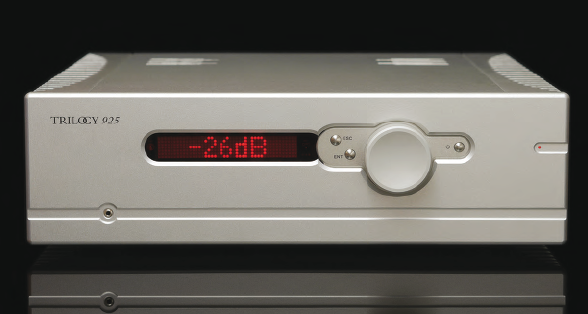 The 925 is Trilogy’s first integrated amplifier, and could be considered a hybrid within a hybrid: not only does it combine hollow and solid-state technologies (two Russian 6N6π triode valves per channel supply pure Class A voltage gain for the 925’s input stage, in an otherwise all-silicon design), it uses an intriguing zero feedback bridge configuration that combines the electrical and sonic benefits of both MOSFET and bipolar devices, all providing a meaty-sounding 125W per channel and a solid, but not immobile, case.

The circuit itself is very short, very symmetrical, and very ‘belt and braces’ in design. Switching is by ruthenium relays, because they sound good and are built to last. The valves are servo controlled to make them extremely symmetrical (and Trilogy’s own discreet HT shunt regulation provides them with optimum voltage feed with no potential for ‘sagging’). And that volume control is actually a digitally controlled potentiometer, allowing for 1dB steps in volume and balance. And, of course, key power supply feeds are kept entirely separate, which is why when you pop the cover on the 925, you are met with a huge toroidal transformer.

The hybrid output stage is worth examining. MOSFETs are wonderfully linear output devices (it’s why they are so often the solid-state choice for valve amp manufacturers turning to transistors), but their high-current performance is not so hot. Bipolar transistors are great at providing high-current muscle, but seldom sound as refined as FETs. There have been many ways to try to overcome this fundamental dichotomy in output stage performance (usually involving a lot of hand-selection, or buying up vast quantities of a typically discontinued ‘wonder’ transistor, both of which significantly increase the per-unit cost of the amplifier). Trilogy’s solution is to build a bridge: two power amplifiers per channel that simultaneously push and pull power to the loudspeaker. This allows the FET to do its ‘first watt’ thing without the heavy lifting of the bipolars to mess up the system ground with large amount of current, even when heavy lifting is required. The amp runs in Class AB, but also runs high bias, which is like saying more Class A than B. This is very carefully monitored by the amp’s own logic system, but does mean the heatsinks get warm to the touch.